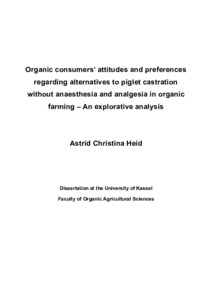 In Germany and other European countries piglets are routinely castrated in order to avoid the occurrence of boar taint, an off-flavour and off-odour of pork. Sensory perception of boar taint varies; however, it is regarded as very unpleasant by many people. Surgical castration which is an effective means against boar taint has commonly been performed without anaesthesia or analgesia within the piglets’ first seven days of life. Piglet castration without anaesthesia has been heavily criticised, as the assumption that young piglets perceive less pain than older animals cannot be supported by scientific evidence. Consequently, surgical castration is only allowed with anaesthesia and/or analgesia in organic farming throughout the European Union since January 2012.
Abandoning piglet castration without pain relief requires the implementation of alternative methods which improve animal welfare while maintaining sensory meat quality. There are three relevant alternatives: castration with anaesthesia and/or analgesia to reduce pain, a vaccination against boar taint (immunocastration) and the fattening of uncastrated male pigs (fattening of boars) combined with measures to reduce and detect boar taint in meat. Consumers’ attitudes and opinions regarding the alternatives are an important factor with regard to the implementation of alternatives, as they are finally supposed to buy the meat.
The objective of this dissertation was to explore organic consumers’ attitudes, preferences and willingness-to-pay regarding piglet castration without pain relief and the three alternatives. Important aspects for the evaluation of the alternatives and influencing factors (e.g. information, taste) on preferences and willingness-to-pay should also be identified.
In autumn 2009 nine focus group discussions were conducted each followed by a Vickrey auction including a tasting of boar salami. Overall, 89 consumers of organic pork participated in the study. Information on piglet castration and alternatives (in three variants) was provided as a basis for discussion. The focus group data were analysed using qualitative content analysis. In order to compare the focus group results with those from the auctions, an innovative approach applying an adapted scoring model to further analyse the data set was used.
The majority of participants were not aware that piglets are castrated without anaesthesia in organic farming. They reacted shocked and disappointed on learning about this practice which did not fit into their image of animal welfare standards in organic farming. Overall, the results show, that for consumers of organic pork castration with anaesthesia and analgesia as well as the fattening of boars may be acceptable alternatives in organic farming. Considering the strong food safety concerns regarding immunocastration, acceptance of this alternative may be questioned. Communication regarding alternatives to piglet castration without anaesthesia and analgesia should take into account that the relevance of the aspects animal welfare, food safety, taste and costs differs between alternatives. Furthermore, it seems advisable not to address an unappetizing topic like piglet castration directly at the point of sale so as not to deter consumers from buying organic pork. The issue of piglet castration demonstrates exemplarily that it is important for the organic sector to implement and maintain high animal welfare standards and communicate them in an appropriate way, thereby trying to prevent strong discrepancies between consumers’ expectations regarding animal husbandry in organic farming and actual conditions. So, disappointment of consumers and a loss of image due to negative reports about animal welfare issues can be avoided.