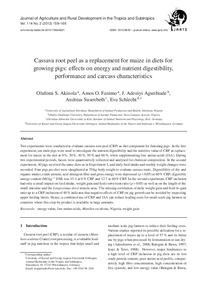 Cassava root peel as a replacement for maize in diets for growing pigs: effects on energy and nutrient digestibility, performance and carcass characteristics

Two experiments were conducted to evaluate cassava root peel (CRP) as diet component for fattening pigs. In the first experiment, ten male pigs were used to investigate the nutrient digestibility and the nutritive value of CRP as replacement for maize in the diet at 0 %, 30 %, 40 %, 50 % and 60 %, while supplementing free amino acids (fAA). During two experimental periods, faeces were quantitatively collected and analysed for chemical composition. In the second experiment, 40 pigs received the same diets as in Experiment 1, and daily feed intake and weekly weight changes were recorded. Four pigs per diet were slaughtered at 70 kg body weight to evaluate carcass traits. Digestibility of dry and organic matter, crude protein, acid detergent fibre and gross energy were depressed (p<0.05) at 60 % CRP; digestible energy content (MJ kg^(−1) DM) was 15.4 at 0 % CRP and 12.7 at 60 % CRP. In the second experiment, CRP inclusion had only a small impact on feed intake, weight gain and feed conversion ratio (p>0.05) as well as on the length of the small intestine and the Longissimus dorsi muscle area. The missing correlation of daily weight gain and feed-to-gain ratio up to a CRP inclusion of 40 % indicates that negative effects of CRP on pig growth can be avoided by respecting upper feeding limits. Hence, a combined use of CRP and fAA can reduce feeding costs for small-scale pig farmers in countries where this crop-by product is available in large amounts.