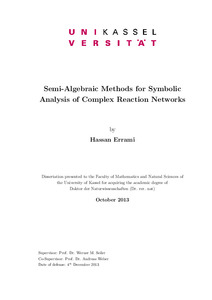 The identification of chemical mechanism that can exhibit oscillatory phenomena in reaction networks are currently of intense interest. In particular, the parametric question of the existence of Hopf bifurcations has gained increasing popularity due to its relation to the oscillatory behavior around the fixed points. However, the detection of oscillations in high-dimensional systems and systems with constraints by the available symbolic methods has proven to be difficult. The development of new efficient methods are therefore required to tackle the complexity caused by the high-dimensionality and non-linearity of these systems.
In this thesis, we mainly present efficient algorithmic methods to detect Hopf bifurcation fixed points in (bio)-chemical reaction networks with symbolic rate constants, thereby yielding information about their oscillatory behavior of the networks.
The methods use the representations of the systems on convex coordinates that arise from stoichiometric network analysis.
One of the methods called HoCoQ reduces the problem of determining the existence of
Hopf bifurcation fixed points to a first-order formula over the ordered field of the reals that can then be solved using computational-logic packages.
The second method called HoCaT uses ideas from tropical geometry to formulate a more efficient method that is incomplete in theory but worked very well for the attempted high-dimensional models involving more than 20 chemical species.
The instability of reaction networks may lead to the oscillatory behaviour. Therefore, we investigate some criterions for their stability using convex coordinates and quantifier elimination techniques.
We also study Muldowney's extension of the classical Bendixson-Dulac criterion for excluding periodic orbits to higher dimensions for polynomial vector fields and we discuss the use of simple conservation constraints and the use of parametric constraints for describing simple convex polytopes on which periodic orbits can be excluded by Muldowney's criteria.
All developed algorithms have been integrated into a common software framework called PoCaB (platform to explore bio- chemical reaction networks by algebraic methods) allowing for automated computation workflows from the problem descriptions. PoCaB also contains a database for the algebraic entities computed from the models of chemical reaction networks.