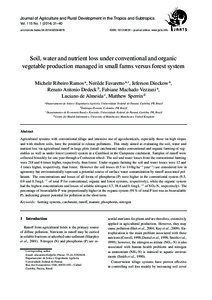 Agricultural systems with conventional tillage and intensive use of agrochemicals, especially those on high slopes and with shallow soils, have the potential to release pollutants. This study aimed at evaluating the soil, water and nutrient lost via agricultural runoff in large plots (small catchments) under conventional and organic farming of vegetables as well as under forest (control) system in a Cambisol in the Campestre catchment. Samples of runoff were collected biweekly for one year through a Coshocton wheel. The soil and water losses from the conventional farming were 218 and 6 times higher, respectively, than forest. Under organic farming the soil and water losses were 12 and 4 times higher, respectively, than forest. However the soil losses (0.5 to 114 kg ha^(−1) year^(−1)) are considered low in agronomy but environmentally represent a potential source of surface water contamination by runoff associated pollutants. The concentrations and losses of all forms of phosphorus (P) were higher in the conventional system (9.5, 0.9 and 0.3 mg L^(−1) of total P for conventional, organic and forest systems, respectively), while the organic system had the highest concentrations and losses of soluble nitrogen (4.7, 38.6 and 0.4 mg L^(−1) of NO_3-N, respectively). The percentage of bioavailable P was proportionally higher in the organic system (91% of total P lost was as bioavailable P), indicating greater potential for pollution in the short term.