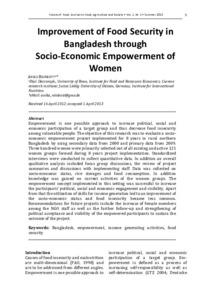 Empowerment is one possible approach to increase political, social and economic participation of a target group and thus decrease food insecurity among vulnerable people. The objective of this research was to evaluate a socio-economic empowerment project implemented for 8 years in rural northern Bangladesh by using secondary data from 2000 and primary data from 2009. Three hundred women were primarily selected out of all existing and active 121 women groups formed during 8 years project implementation. Standardized interviews were conducted to collect quantitative data. In addition an overall qualitative analysis included focus group discussions, the review of project summaries and discussions with implementing staff. Data was collected on socio-economic status, rice storages and food consumption. In addition knowledge was gained on current activities of the women groups. The empowerment concept implemented in this setting was successful to increase the participants’ political, social and economic engagement and visibility. Apart from that the utilization of skills for income generation led to an improvement of the socio-economic status and food insecurity became less common. Recommendations for future projects include the increase of female members among the NGO staff as well as the further follow-up and strengthening of political acceptance and visibility of the empowered participants to sustain the outcome of the project.