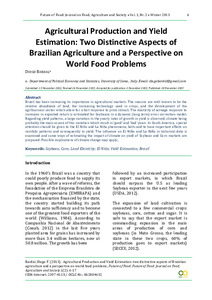 Brazil has been increasing its importance in agricultural markets. The reasons are well known to be the relative abundance of land, the increasing technology used in crops, and the development of the agribusiness sector which allow for a fast response to price stimuli. The elasticity of acreage response to increases in expected return is estimated for Soybeans in a dynamic (long term) error correction model. Regarding yield patterns, a large variation in the yearly rates of growth in yield is observed, climate being probably the main source of this variation which result in ‘good’ and ‘bad’ years. In South America, special attention should be given to the El Niño and La Niña phenomena, both said to have important effects on rainfalls patterns and consequently in yield. The influence on El Niño and La Niña in historical data is examined and some ways of estimating the impact of climate on yield of Soybean and Corn markets are proposed. Possible implications of climate change may apply.