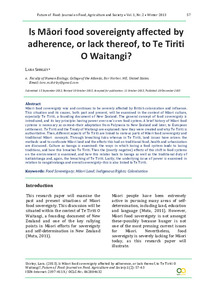 Māori food sovereignty was and continues to be severely affected by British colonisation and influence. This situation and its causes, both past and present, will be examined in the context of Māori culture, especially Te Tiriti, a founding document of New Zealand. The general concept of food sovereignty is introduced, and its key principle: having power over one's own food system. A brief history of Māori food systems is necessary as context–their adaptation from Polynesia to New Zealand and later, to European settlement. Te Tiriti and the Treaty of Waitangi are explained: how they were created and why Te Tiriti is authoritative. Then, different aspects of Te Tiriti are linked to various parts of Māori food sovereignty and traditional Māori concepts. Through breaching tuku whenua in Te Tiriti, land issues have arisen: the methods used to confiscate Māori land and the effects this had on traditional food, health and urbanisation are discussed. Culture as taonga is examined: the ways in which losing a food system leads to losing traditions, and how this breaches Te Tiriti. Then the (mostly negative) effects of this shift in food systems on the environment is examined, and how this relates back to taonga as well as the traditional duty of kaitiakitanga and, again, the breaching of Te Tiriti. Lastly, the underlying issue of power is examined in relation to rangatiratanga and overall sovereignty–this is also linked to Te Tiriti.