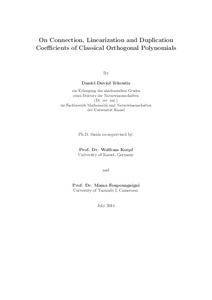 On Connection, Linearization and Duplication Coefficients of Classical Orthogonal Polynomials

In this work, we have mainly achieved the following:

1. we provide a review of the main methods used for the computation of the connection
and linearization coefficients between orthogonal polynomials of a continuous variable, moreover using a new approach, the duplication problem of these polynomial
families is solved;

3. we propose a method to generate the connection, linearization and duplication coefficients for q-orthogonal polynomials;

4. we propose a unified method to obtain these coefficients in a generic way for orthogonal polynomials on quadratic and q-quadratic lattices.

Our algorithmic approach to compute linearization, connection and duplication coefficients is based on the one used by Koepf and Schmersau and on the NaViMa algorithm. Our main technique is to use explicit formulas for structural identities of classical orthogonal polynomial systems.
We find our results by an application of computer algebra. The major algorithmic tools for our development are Zeilberger’s algorithm, q-Zeilberger’s algorithm, the Petkovšek-van-Hoeij algorithm, the q-Petkovšek-van-Hoeij algorithm, and Algorithm 2.2, p. 20 of Koepf's book
"Hypergeometric Summation" and it q-analogue.