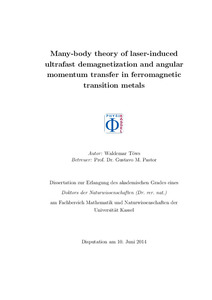 An electronic theory is developed, which describes the ultrafast demagnetization in itinerant ferromagnets following the absorption of a femtosecond laser pulse. The present work intends to elucidate the microscopic physics of this ultrafast phenomenon by identifying its fundamental mechanisms. In particular, it aims to reveal the nature of the involved spin excitations and angular-momentum transfer between spin and lattice, which are still subjects of intensive debate. In the first preliminary part of the thesis the initial stage of the laser-induced demagnetization process is considered. In this stage the electronic system is highly excited by spin-conserving elementary excitations involved in the laser-pulse absorption, while the spin or magnon degrees of freedom remain very weakly excited. The role of electron-hole excitations on the stability of the magnetic order of one- and two-dimensional 3d transition metals (TMs) is investigated by using ab initio density-functional theory. The results show that the local magnetic moments are remarkably stable even at very high levels of local energy density and, therefore, indicate that these moments preserve their identity throughout the entire demagnetization process. In the second main part of the thesis a many-body theory is proposed, which takes into account these local magnetic moments and the local character of the involved spin excitations such as spin fluctuations from the very beginning. In this approach the relevant valence 3d and 4p electrons are described in terms of a multiband model Hamiltonian which includes Coulomb interactions, interatomic hybridizations, spin-orbit interactions, as well as the coupling to the time-dependent laser field on the same footing. An exact numerical time evolution is performed for small ferromagnetic TM clusters. The dynamical simulations show that after ultra-short laser pulse absorption the magnetization of these clusters decreases on a time scale of hundred femtoseconds. In particular, the results reproduce the experimentally observed laser-induced demagnetization in ferromagnets and demonstrate that this effect can be explained in terms of the following purely electronic non-adiabatic mechanism: First, on a time scale of 10–100 fs after laser excitation the spin-orbit coupling yields local angular-momentum transfer between the spins and the electron orbits, while subsequently the orbital angular momentum is very rapidly quenched in the lattice on the time scale of one femtosecond due to interatomic electron hoppings. In combination, these two processes result in a demagnetization within hundred or a few hundred femtoseconds after laser-pulse absorption.