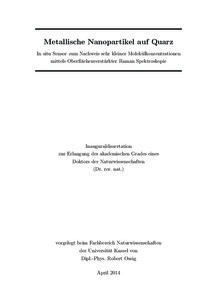 This work presents the developement of an chemically stable and easy to produce
in situ sensor for fast and reliable detection of polycyclic aromatic hydrocarbons
(PAH) in low nanomolar concentrations. Metallic nanoparticles on dielectric substrates werde used for the rst time with surface enhanced Raman spectroscopy
(SERS) in combination with shifted excitation Raman difference spectroscopy
(SERDS).
The preparation of the metallic nanoparticle ensembles with Volmer-Webergrowth
is described first. The nanoparticles are characterized with both, optical
spectroscopy and atomic force microscopy. The morphological properties of the
nanoparticle ensembles are de ned by the mean axial ratio (a/b) and the mean
equivalent radius (R Äq), respectively.
The prepared and characterized nanoparticles were then used for intensive Raman
spectroscopy measurements. Two sophisticated diode laser systems were used in
cooperation with the TU Berlin, to carry out these experiments. The first step
was to establish the ideal combination of excitation wavelength of the diode laser
and the maximum of the surface plasmon resonance of the nanoparticle ensembles.
From these results it was deduced, that for an optimum Raman signal the
plasmon resonance maximum of the nanoparticle ensemble has to be red-shifted
a few nanometeres in respect to the excitation wavelength. Different PAHs werde
detected in concentrations of only 2 and 0.5 nmol/, respectively. Furthermore, the
obtained results show an excellent reproducability.
In addition the time dependence of the Raman signal intensity was investigated.
The results of these measurements show, that only 2 minutes after placing the
substrates in the molecular solution, a detectable Raman signal was generated.
The maximum Raman signal, i.e. the time in which the molecular adsorption
process is finished, was determined to about 10 minutes.
In summary it was shown, that the used metallic nanoparticle ensembles are highly
usable as substrates for SERS in combination with SERDS to detect PAHs in
low nanomolar concentrations.