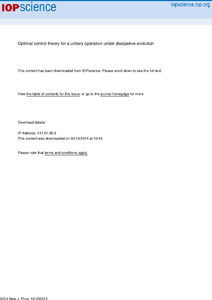 Optimal control theory for a unitary operation under dissipative evolution

We show that optimizing a quantum gate for an open quantum system requires
the time evolution of only three states irrespective of the dimension of Hilbert
space. This represents a significant reduction in computational resources compared
to the complete basis of Liouville space that is commonly believed
necessary for this task. The reduction is based on two observations: the target is
not a general dynamical map but a unitary operation; and the time evolution of
two properly chosen states is sufficient to distinguish any two unitaries. We
illustrate gate optimization employing a reduced set of states for a controlled
phasegate with trapped atoms as qubit carriers and a iSWAP gate with
superconducting qubits.