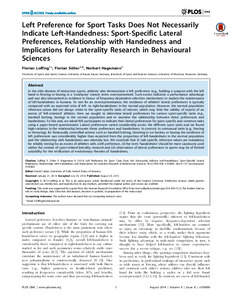 Left preference for sport tasks does not necessarily indicate left-handedness

In the elite domain of interactive sports, athletes who demonstrate a left preference (e.g., holding a weapon with the left
hand in fencing or boxing in a ‘southpaw’ stance) seem overrepresented. Such excess indicates a performance advantage
and was also interpreted as evidence in favour of frequency-dependent selection mechanisms to explain the maintenance
of left-handedness in humans. To test for an overrepresentation, the incidence of athletes’ lateral preferences is typically
compared with an expected ratio of left- to right-handedness in the normal population. However, the normal population
reference values did not always relate to the sport-specific tasks of interest, which may limit the validity of reports of an
excess of ‘left-oriented’ athletes. Here we sought to determine lateral preferences for various sport-specific tasks (e.g.,
baseball batting, boxing) in the normal population and to examine the relationship between these preferences and
handedness. To this end, we asked 903 participants to indicate their lateral preferences for sport-specific and common tasks
using a paper-based questionnaire. Lateral preferences varied considerably across the different sport tasks and we found
high variation in the relationship between those preferences and handedness. In contrast to unimanual tasks (e.g., fencing
or throwing), for bimanually controlled actions such as baseball batting, shooting in ice hockey or boxing the incidence of
left preferences was considerably higher than expected from the proportion of left-handedness in the normal population
and the relationship with handedness was relatively low. We conclude that (i) task-specific reference values are mandatory
for reliably testing for an excess of athletes with a left preference, (ii) the term ‘handedness’ should be more cautiously used
within the context of sport-related laterality research and (iii) observation of lateral preferences in sports may be of limited
suitability for the verification of evolutionary theories of handedness.