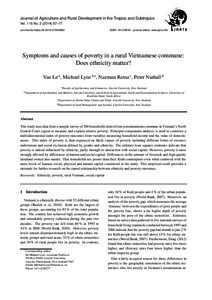 Symptoms and causes of poverty in a rural Vietnamese commune: Does ethnicity matter?

This study uses data from a sample survey of 200 households drawn from a mountainous commune in Vietnam’s North Central Coast region to measure and explain relative poverty. Principal components analysis is used to construct a multidimensional index of poverty outcomes from variables measuring household income and the value of domestic assets. This index of poverty is then regressed on likely causes of poverty including different forms of resource endowment and social exclusion defined by gender and ethnicity. The ordinary least squares estimates indicate that poverty is indeed influenced by ethnicity, partly through its interaction with social capital. However, poverty is most strongly affected by differences in human and social capital. Differences in the amount of livestock and high quality farmland owned also matter. Thai households are poorer than their Kinh counterparts even when endowed with the same levels of human, social, physical and natural capital considered in the study. This empirical result provides a rationale for further research on the causal relationship between ethnicity and poverty outcomes.