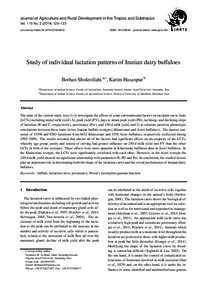 The aims of the current study were 1) to investigate the effects of some environmental factors on lactation curve traits (LCTs) including initial milk yield (A), peak yield (PY), days to attain peak yield (PD), inclining- and declining slope of lactation (B and C, respectively), persistency (Per), and 240-d milk yield, and 2) to estimate pairwise phenotypic correlations between these traits in two Iranian buffalo ecotypes (Khuzestani and Azeri buffaloes). The dataset consisted of 15396 and 9283 lactations from 6632 Khuzestani and 3558 Azeri buffaloes, respectively (collected during 1992–2009). The results revealed that almost all of the factors had significant effects on the majority of the LCTs, whereby age group, parity and season of calving had greater influence on 240-d milk yield and PY than the other LCTs in both of the ecotypes. These effects were more apparent in Khuzestani buffaloes than in Azeri buffaloes. In the Khuzestani ecotype, the LCTs were significantly correlated with each other. However, in the Azeri ecotype the 240-d milk yield showed no significant relationship with parameters B, PD and Per. In conclusion, the studied factors play an important role in determining both the shape of the lactation curve and the overal performance of Iranian dairy buffaloes.