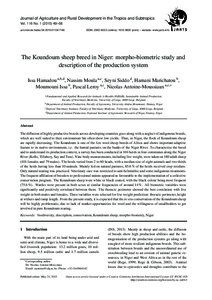 The Koundoum sheep breed in Niger: morpho-biometric study and description of the production system

The diffusion of highly productive breeds across developing countries goes along with a neglect of indigenous breeds, which are well suited to their environment but often show low yields. Thus, in Niger, the flock of Koundoum sheep are rapidly decreasing. The Koundoum is one of the few wool sheep breeds of Africa and shows important adaptive feature to its native environment, i.e. the humid pastures on the banks of the Niger River. To characterise the breed and to understand its production context, a survey has been conducted in 104 herds in four communes along the Niger River (Kollo, Tillabery, Say and Tera). Nine body measurements, including live weight, were taken on 180 adult sheep (101 females and 79 males). The herds varied from 2 to 60 heads, with a median size of eight animals and two thirds of the herds having less than 10 animals. Mainly fed on natural pastures, 85.6% of the herds received crop residues. Only natural mating was practiced. Veterinary care was restricted to anti-helminthic and some indigenous treatments. The frequent affiliation of breeders to professional unions appeared as favourable to the implementation of a collective conservation program. The Koundoum sheep were white or black coated, with the black colour being most frequent (75.6%). Wattles were present in both sexes at similar frequencies of around 14%. All biometric variables were significantly and positively correlated between them. The thoracic perimeter showed the best correlation with live weight in both males and females. Three variables were selected for live weight prediction: thoracic perimeter, height at withers and rump length. From the present study, it is expected that the in situ conservation of the Koundoum sheep will be highly problematic, due to lack of market opportunities for wool and the willingness of smallholders to get involved in pure Koundoum rearing.