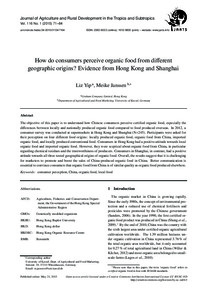 How do consumers perceive organic food from different geographic origins? Evidence from Hong Kong and Shanghai