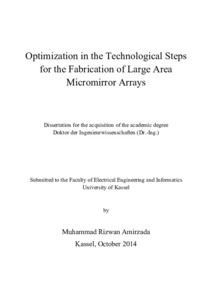 Micromirror arrays are a very strong candidate for future energy saving applications. Within this work, the fabrication process for these micromirror arrays has been optimized and some steps for the large area fabrication of micromirror modules were performed. At first the surface roughness of the insulation layer of silicon dioxide (SiO2) was investigated. This SiO2 thin layer was deposited on three different type of substrates i.e. silicon, glass and Polyethylene Naphthalate (PEN) substrates. The deposition techniques which has been used are Plasma Enhanced Chemical Vapor Deposition (PECVD), Physical Vapor Deposition (PVD) and Ion Beam Sputter Deposition (IBSD). The thickness of the SiO2 thin layer was kept constant at 150nm for each deposition process. The surface roughness was measured by Stylus Profilometry and Atomic Force Microscopy (AFM). It was found that the layer which was deposited by IBSD has got the minimum surface roughness value and the layer which was deposited by PECVD process has the highest surface roughness value. During the same investigation, the substrate temperature of PECVD was varied from 80° C to 300° C with the step size of 40° C and it was found that the surface roughness keeps on increasing as the substrate holder temperature increases in the PECVD process. A new insulation layer system was proposed to minimize the dielectric breakdown effect in insulation layer for micromirror arrays. The conventional bilayer system was replaced by five layer system but the total thickness of insulation layer remains the same. It was found that during the actuation of micromirror arrays structure, the dielectric breakdown effect was reduced considerably as compared to the bilayer system. In the second step the fabrication process of the micromirror arrays was successfully adapted and transferred from glass substrates to the flexible PEN substrates by optimizing the conventional process recipe. In the last section, a large module of micromirror arrays was fabricated by electrically interconnecting four 10cm×10cm micromirror modules on a glass pane having dimensions of 21cm×21cm.