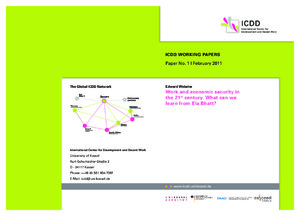 Work and economic security in the 21st century

(What can we learn from Ela Bhatt?)

In recent decades there has been a transformation of two central concepts
of modernity – labour and the household. Ela Bhatt – the founder of the
Self-Employed Women’s Association of India (SEWA), has made an
important contribution to this transformation. Through the emergence of
unions such as SEWA, the notion of who represents labour is being
broadened; the marginalised are finding an institutional voice. Increasingly,
the household is being recognised as a site of both production and
reproduction. SEWA is not a traditional trade union that aims, through
collective bargaining with an employer, to improve its members’ wages and
working conditions as sellers of their labour power. Instead, it aims to
empower women economically in the informal economy by bringing them
into the mainstream economy as owners of their labour. The union
dimension of SEWA builds their collective power through struggle; the cooperative
dimension translates their bargaining power into the economic and
social development of its members and their community. Besides, Bhatt’s
approach to the self-employed was a direct challenge to the ILO’s tripartism
when it was established in the early seventies. The first part of the paper
provides a short biography of Ela Bhatt, describes the origins of SEWA,
analyses a ‘classification struggle’ over how and who is to define what a
worker is. In the second part the author considers SEWAs innovative
organizing strategy and is rethinking modernity in the labour context. In the
conclusion the paper discusses the lessons that can be learnt from Ela
Bhatt.