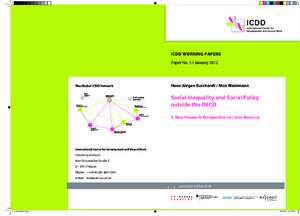 Almost all Latin American countries are still marked by extreme forms of social inequality –
and to an extent, this seems to be the case regardless of national differences in the
economic development model or the strength of democracy and the welfare state. Recent
research highlights the fact that the heterogeneous labour markets in the region are a key
source of inequality. At the same time, there is a strengthening of ‘exclusive’ social policy,
which is located at the fault lines of the labour market and is constantly (re-)producing
market-mediated disparities. In the last three decades, this type of social policy has even
enjoyed democratic legitimacy. These dynamics challenge many of the assumptions
guiding social policy and democratic theory, which often attempt to account for the
specificities of the region by highlighting the purported flaws of certain policies. We
suggest taking a different perspective: social policy in Latin American should not be
grasped as a deficient or flawed type of social policy, but as a very successful relation of
political domination. ‘Relational social analysis’ locates social policy in the ‘tension zone’
constituted by the requirements of economic reproduction, demands for democratic
legitimacy and the relative autonomy of the state. From this vantage point, we will make
the relation of domination in question accessible for empirical research. It seems
particularly useful for this purpose to examine the recent shifts in the Latin American
labour markets, which have undergone numerous reforms. We will examine which
mechanisms, institutions and constellations of actors block or activate the potentials of
redistribution inherent in such processes of political reform. This will enable us to explore
the socio-political field of forces that has been perpetuating the social inequalities in Latin
America for generations.