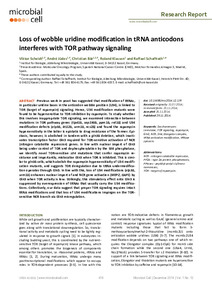 Previous work in yeast has suggested that modification of tRNAs,
in particular uridine bases in the anticodon wobble position (U34), is linked to
TOR (target of rapamycin) signaling. Hence, U34 modification mutants were
found to be hypersensitive to TOR inhibition by rapamycin. To study whether
this involves inappropriate TOR signaling, we examined interaction between
mutations in TOR pathway genes (tip41Δ, sap190Δ, ppm1Δ, rrd1Δ) and U34
modification defects (elp3Δ, kti12Δ, urm1Δ, ncs2Δ) and found the rapamycin
hypersensitivity in the latter is epistatic to drug resistance of the former. Epistasis,
however, is abolished in tandem with a gln3Δ deletion, which inactivates
transcription factor Gln3 required for TOR-sensitive activation of NCR
(nitrogen catabolite repression) genes. In line with nuclear import of Gln3
being under control of TOR and dephosphorylation by the Sit4 phosphatase,
we identify novel TOR-sensitive sit4 mutations that confer rapamycin resistance
and importantly, mislocalise Gln3 when TOR is inhibited. This is similar
to gln3Δ cells, which abolish the rapamycin hypersensitivity of U34 modification
mutants, and suggests TOR deregulation due to tRNA undermodification
operates through Gln3. In line with this, loss of U34 modifications (elp3Δ,
urm1Δ) enhances nuclear import of and NCR gene activation (MEP2, GAP1) by
Gln3 when TOR activity is low. Strikingly, this stimulatory effect onto Gln3 is
suppressed by overexpression of tRNAs that usually carry the U34 modifications.
Collectively, our data suggest that proper TOR signaling requires intact
tRNA modifications and that loss of U34 modifications impinges on the TORsensitive
NCR branch via Gln3 misregulation.