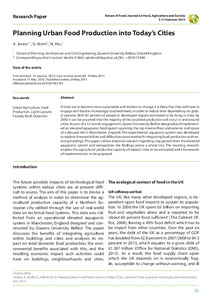 If cities are to become more sustainable and resilient to change it is likely that they will have to engage with food at increasingly localised levels, in order to reduce their dependency on global systems. With 87 percent of people in developed regions estimated to be living in cities by 2050 it can be assumed that the majority of this localised production will occur in and around cities. As part of a 12 month engagement, Queen’s University Belfast designed and implemented an elevated aquaponic food system spanning the top internal floor and exterior roof space of a disused mill in Manchester, England. The experimental aquaponic system was developed to explore the possibilities and difficulties associated with integrating food production with existing buildings. This paper utilises empirical research regarding crop growth from the elevated aquaponic system and extrapolates the findings across a whole city. The resulting research enables the agricultural productive capacity of today’s cities to be estimated and a framework of implementation to be proposed.