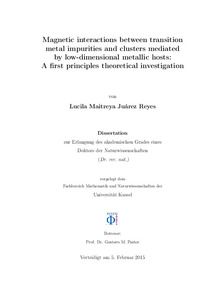 The magnetic properties and interactions between transition metal (TM) impurities and clusters in low-dimensional metallic hosts are studied using a first principles
theoretical method. In the first part of this work, the effect of magnetic order in 3d-5d systems is addressed from the perspective of its influence on the enhancement of the magnetic anisotropy energy (MAE). In the second part, the possibility of using external electric fields (EFs) to control the magnetic properties and interactions between nanoparticles deposited at noble metal surfaces is investigated.
The inﬂuence of 3d composition and magnetic order on the spin polarization of the
substrate and its consequences on the MAE are analyzed for the case of 3d impurities
in one- and two-dimensional polarizable hosts. It is shown that the MAE and easy-
axis of monoatomic free standing 3d-Pt wires is mainly determined by the atomic
spin-orbit (SO) coupling contributions. The competition between ferromagnetic (FM) and antiferromagnetic (AF) order in FePtn wires is studied in detail for n=1-4 as a function of the relative position between Fe atoms. Our results show an oscillatory behavior of the magnetic polarization of Pt atoms as a function of their distance from the magnetic
impurities, which can be correlated to a long-ranged magnetic coupling of the Fe
atoms. Exceptionally large variations of the induced spin and orbital moments at the
Pt atoms are found as a function of concentration and magnetic order. Along with
a violation of the third Hund’s rule at the Fe sites, these variations result in a non
trivial behavior of the MAE.
In the case of TM impurities and dimers at the Cu(111), the effects of surface charging
and applied EFs on the magnetic properties and substrate-mediated magnetic interactions have been investigated. The modifications of the surface electronic structure, impurity local moments and magnetic exchange coupling as a result of the EF-induced metallic screening and charge rearrangements are analysed. In a ﬁrst study, the properties of surface substitutional Co and Fe impurities are investigated as a function of
the external charge per surface atom q. At large inter-impurity distances the effective magnetic exchange coupling ∆E between impurities shows RKKY-like oscillations
as a function of the distance which are not signiﬁcantly affected by the considered values of q. For distances r < 10 Å, important modifications in the magnitude of ∆E, involving changes from FM to AF coupling, are found depending non-monotonously on the value and polarity of q. The interaction energies are analysed from a local perspective. In a second study, the interplay between external EF effects, internal magnetic order and substrate-mediated magnetic coupling has been investigated for Mn dimers on Cu(111). Our calculations show that EF (∼ 1eV/Å) can induce a switching from AF to FM ground-state magnetic order within single Mn dimers. The relative coupling between a pair of dimers also shows RKKY-like oscillations as a function of the inter-dimer distance. Their effective magnetic exchange interaction
is found to depend significantly on the magnetic order within the Mn dimers and on
their relative orientation on the surface. The dependence of the substrate-mediated
interaction on the magnetic state of the dimers is qualitatively explained in terms
of the differences in the scattering of surface electrons. At short inter-dimer distances, the ground-state conﬁguration is determined by an interplay between exchange interactions and EF effects. These results demonstrate that external surface charging and applied EFs offer remarkable possibilities of manipulating the sign and strength of the magnetic coupling of surface supported nanoparticles.