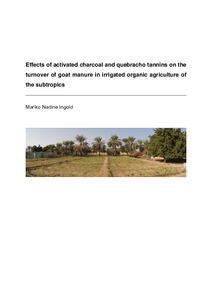 We thank the Royal Court Affairs (Royal Gardens and Farms), Sultanate of Oman, for its support and the German Research Foundation (DFG) for funding this research within the Research Training Group 1397 “Regulation of Soil Organic Matter and Nutrient Turnover in Organic Agriculture” at University of Kassel, Germany.