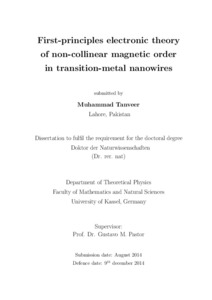 The structural, electronic and magnetic properties of one-dimensional 3d transition-metal (TM)
monoatomic chains having linear, zigzag and ladder geometries are investigated in the frame-work of
first-principles density-functional theory. The stability of long-range magnetic order along the
nanowires is determined by computing the corresponding frozen-magnon dispersion relations as a
function of the 'spin-wave' vector q.
First, we show that the ground-state magnetic orders of V, Mn and Fe linear chains at the equilibrium
interatomic distances are non-collinear (NC) spin-density waves (SDWs) with characteristic equilibrium
wave vectors q that depend on the composition and interatomic distance. The electronic and
magnetic properties of these novel spin-spiral structures are discussed from a local perspective
by analyzing the spin-polarized electronic densities of states, the local magnetic moments and the
spin-density distributions for representative values q. Second, we investigate the stability
of NC spin arrangements in Fe zigzag chains and ladders. We find that the non-collinear SDWs are
remarkably stable in the biatomic chains (square ladder), whereas ferromagnetic order (q =0)
dominates in zigzag chains (triangular ladders). The different magnetic structures are interpreted in terms of the
corresponding effective exchange interactions J(ij) between the local
magnetic moments μ(i) and μ(j) at atoms i and j.
The effective couplings are derived by fitting a classical Heisenberg model to the
ab initio magnon dispersion relations. In addition they are analyzed in the
framework of general magnetic phase diagrams having arbitrary first, second,
and third nearest-neighbor (NN) interactions J(ij).

The effect of external electric fields (EFs) on the stability of NC magnetic order has been
quantified for representative monoatomic free-standing and deposited chains. We find that an
external EF, which is applied perpendicular to the chains, favors non-collinear order in V chains,
whereas it stabilizes the ferromagnetic (FM) order in Fe chains. Moreover, our calculations reveal a change
in the magnetic order of V chains deposited on the Cu(110) surface in the presence of external EFs.
In this case the NC spiral order, which was unstable in the absence of EF, becomes the most
favorable one when perpendicular fields of the order of 0.1 V/Å are applied.


As a final application of the theory we study the magnetic interactions within monoatomic TM chains deposited
on graphene sheets. One observes that even weak chain substrate hybridizations can
modify the magnetic order. Mn and Fe chains show incommensurable NC spin configurations. Remarkably, V chains
show a transition from a spiral magnetic order in the freestanding geometry to FM order when they are deposited
on a graphene sheet. Some TM-terminated zigzag graphene-nanoribbons, for example V and Fe
terminated nanoribbons, also show NC spin configurations. Finally, the magnetic anisotropy energies (MAEs) of TM
chains on graphene are investigated. It is shown that Co and Fe chains exhibit significant MAEs and orbital
magnetic moments with in-plane easy magnetization axis. The remarkable changes in the magnetic properties of chains
on graphene are correlated to charge transfers from the TMs to NN carbon atoms.

Goals and limitations of this study and the resulting perspectives of future investigations are
discussed.