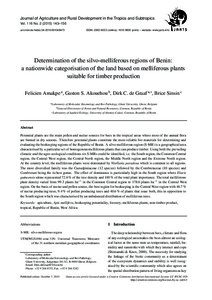 Determination of the silvo-melliferous regions of Benin: a nationwide categorisation of the land based on melliferous plants suitable for timber production

Perennial plants are the main pollen and nectar sources for bees in the tropical areas where most of the annual flora are burned in dry seasons. Therefore perennial plants constitute the most reliable bio materials for determining and evaluating the beekeeping regions of the Republic of Benin. A silvo-melliferous region (S-MR) is a geographical area characterised by a particular set of homogenous melliferous plants that can produce timber. Using both the prevailing climatic and the agro-ecological conditions six S-MRs could be identified, i.e. the South region, the Common Central region, the Central West region, the Central North region, the Middle North region and the Extreme North region. At the country level, the melliferous plants were dominated by Vitellaria paradoxa which is common to all regions. The most diversified family was the Caesalpiniaceae (12 species) followed by the Combretaceae (10 species) and Combretum being the richest genus. The effect of dominance is particularly high in the South region where Elaeis guineensis alone represented 72.6% of the tree density and 140% of the total plant importance. The total melliferous plant density varied from 99.3 plants ha^(−1) in the Common Central region to 178.0 plants ha^(−1) in the Central West region. On the basis of nectar and pollen source, the best region for beekeeping is the CentralWest region with 46.7% of nectar producing trees, 9.4% of pollen producing trees and 40.6% of plants that issue both, this in opposition to the South region which was characterised by an unbalanced distribution of melliferous trees.