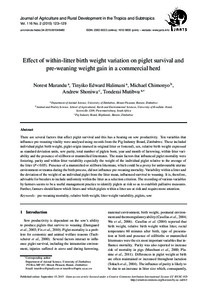 There are several factors that affect piglet survival and this has a bearing on sow productivity. Ten variables that influence pre-weaning vitality were analysed using records from the Pig Industry Board, Zimbabwe. These included individual piglet birth weight, piglet origin (nursed in original litter or fostered), sex, relative birth weight expressed as standard deviation units, sow parity, total number of piglets born, year and month of farrowing, within-litter variability and the presence of stillborn or mummified littermates. The main factors that influenced piglet mortality were fostering, parity and within-litter variability especially the weight of the individual piglet relative to the average of the litter (P<0.05). Presence of a mummified or stillborn littermate, which could be a proxy for unfavourable uterine environment or trauma during the birth process, did not influence pre-weaning mortality. Variability within a litter and the deviation of the weight of an individual piglet from the litter mean, influenced survival to weaning. It is, therefore, advisable for breeders to include uniformity within the litter as a selection criterion. The recording of various variables by farmers seems to be a useful management practice to identify piglets at risk so as to establish palliative measures. Further, farmers should know which litters and which piglets within a litter are at risk and require more attention.