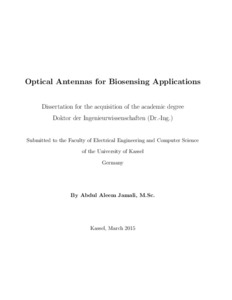 The aim of the thesis is to theoretically investigate optical/plasmonic antennas for biosensing applications. The full 3-D numerical electromagnetic simulations have been performed by using finite integration technique (FIT). The electromagnetic properties of surface plasmon polaritons (SPPs) and the localized surface plasmons (LSPs) based devices are studied for sensing purpose. The surface plasmon resonance (SPR) biosensors offer high refractive index sensitivity at a fixed wavelength but are not enough for the detection of low concentrations of molecules. It has been demonstrated that the sensitivity of SPR sensors can be increased by employing the transverse magneto-optic Kerr effect (TMOKE) in combination with SPPs. The sensor based on the phenomena of TMOKE and SPPs are known as magneto-optic SPR (MOSPR) sensors. The optimized MOSPR sensor is analyzed which provides 8 times higher sensitivity than the SPR sensor, which will be able to detect lower concentration of molecules. But, the range of the refractive index detection is limited, due to the rapid decay of the amplitude of the MOSPR-signal with the increase of the refractive indices. Whereas, LSPs based sensors can detect lower concentrations of molecules, but their sensitivity is small at a fixed wavelength. Therefore, another device configuration known as perfect plasmonic absorber (PPA) is investigated which is based on the phenomena of metal-insulator-metal (MIM) waveguide. The PPA consists of a periodic array of gold nanoparticles and a thick gold film separated by a dielectric spacer. The electromagnetic modes of the PPA system are analyzed for sensing purpose. The second order mode of the PPA at a fixed wavelength has been proposed for the first time for biosensing applications. The PPA based sensor combines the properties of the LSPR sensor and the SPR sensor, for example, it illustrates increment in sensitivity of the LSPR sensor comparable to the SPR and can detect lower concentration of molecules due to the presence of nanoparticles.