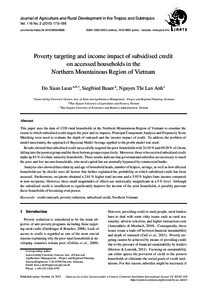 This paper uses the data of 1338 rural households in the Northern Mountainous Region of Vietnam to examine the extent to which subsidised credit targets the poor and its impacts. Principal Component Analysis and Propensity Score Matching were used to evaluate the depth of outreach and the income impact of credit. To address the problem of model uncertainty, the approach of Bayesian Model Average applied to the probit model was used.
Results showed that subsidised credit successfully targeted the poor households with 24.10% and 69.20% of clients falling into the poorest group and the three bottom groups respectively. Moreover, those who received subsidised credit make up 83% of ethnic minority households. These results indicate that governmental subsidies are necessary to reach the poor and low income households, who need capital but are normally bypassed by commercial banks.
Analyses also showed that ethnicity and age of household heads, number of helpers, savings, as well as how affected households are by shocks were all factors that further explained the probability at which subsidised credit has been assessed. Furthermore, recipients obtained a 2.61% higher total income and a 5.93% higher farm income compared to non-recipients. However, these small magnitudes of effects are statistically insignificant at a 5% level. Although the subsidised credit is insufficient to significantly improve the income of the poor households, it possibly prevents these households of becoming even poorer.