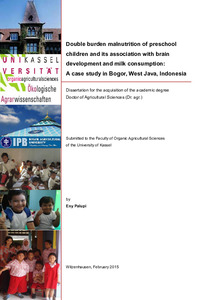 Protecting the quality of children growth and development becomes a supreme qualification for the betterment of a nation. Double burden child malnutrition is emerging worldwide which might have a strong influence to the quality of child brain development and could not be paid-off on later life. Milk places a notable portion during the infancy and childhood. Thus, the deep insight on milk consumption pattern might explain the phenomenon of double burden child malnutrition correlated to the cognitive impairments.
Objective: Current study is intended (1) to examine the current face of Indonesian double burden child malnutrition: a case study in Bogor, West Java, Indonesia, (2) to investigate the association of this phenomenon with child brain development, and (3) to examine the contribution of socioeconomic status and milk consumption on this phenomenon so that able to formulate some possible solutions to encounter this problem.
Design: A cross-sectional study using a structured coded questionnaire was conducted among 387 children age 5-6 years old and their parents from 8 areas in Bogor, West-Java, Indonesia on November 2012 to December 2013, to record some socioeconomic status, anthropometric measurements, and history of breast feeding. Diet and probability of milk intake was assessed by two 24 h dietary recalls and food frequency questionnaire (FFQ). Usual daily milk intake was calculated using Multiple Source Method (MSM). Some brain development indicators (IQ, EQ, learning, and memory ability) using Projective Multi-phase Orientation method was also executed to learn the correlation between double burden child malnutrition and some brain development indicator.
Results and conclusions: A small picture of child double burden malnutrition is shown in Bogor, West Java, Indonesia, where prevalence of Severe Acute Malnutrition (SAM) is 27.1%, Moderate Acute Malnutrition (MAM) is 24.9%, and overnutrition is 7.7%. This phenomenon proves to impair the child brain development. The malnourished children, both under- and over- nourished children have significantly (P-value<0.05) lower memory ability compared to the normal children (memory score, N; SAM = 45.2, 60; MAM = 48.5, 61; overweight = 48.4, 43; obesity = 47.9, 60; normal = 52.4, 163). The plausible reasons behind these evidences are the lack of nutrient intake during the sprout growth period on undernourished children or increasing adiposity on overnourished children might influence the growth of hippocampus area which responsible to the memory ability. Either undernutrition or overnutrition, the preventive action on this problem is preferable to avoid ongoing cognitive performance loss of the next generation. Some possible solutions for this phenomenon are promoting breast feeding initiation and exclusive breast feeding practices for infants, supporting the consumption of a normal portion of milk (250 to 500 ml per day) for children, and breaking the chain of poverty by socioeconomic improvement. And, the national food security becomes the fundamental point for the betterment of the next. In the global context, the causes of under- and over- nutrition have to be opposed through integrated and systemic approaches for a better quality of the next generation of human beings.

This study was financially supported by Faculty for the Future program from Schlumberger Foundation.