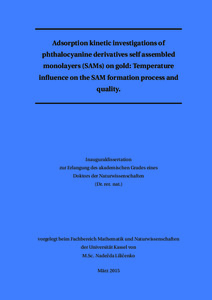 The ordered nano-structured surfaces, like self-assembled monolayers (SAMs) are
of a great scientific interest, due to the low cost, simplicity, and versatility of
this method. SAMs found numerous of applications in molecular electronics,
biochemistry and optical devices. Phthalocyanine (Pc) complexes are of particular
interest for the SAM preparation. These molecules exhibit fascinating physical
properties and are chemically and thermally stable. Moreover their complex
structure is advantageous for the fabrication of switchable surfaces.
In this work the adsorption process of Pcs derivatives, namely, subphthalocyanines
(SubPcB) and terbium (2TbPc) sandwich complexes on gold has been investigated.
The influence of the molecular concentration, chain length of peripheral groups,
and temperature on the film formation process has been examined using a number
of techniques. The SAMs formation process has been followed in situ and in
real time by means of second harmonic generation (SHG) and surface plasmon
resonance (SPR) spectroscopy. To investigate the quality of the SAMs prepared at
different temperatures atomic force microscopy (AFM) and X-Ray photoelectron
spectroscopy (XPS)measurements were performed.
Valuable information about SubPcB and 2TbPc adsorbtion process has been
obtained in the frame of this work. The kinetic data, obtained with SHG and
SPR, shows the best conformance with the first order Langmuir kinetic model.
Comparing SHG and SPR results, it has been found, that the film formation occurs
faster than the formation of chemical bonds. Such, the maximum amount of
molecules on the surface is reached after 6 min for SubPcB and 30 min for 2TbPc.
However, at this time the amount of formed chemicals bonds is only 10% and 40%
for SubPcB and 2TbPc, respectively.
The most intriguing result, among others, was obtained at T = 2 °C, where the
formation of the less dense SAMs have been detected with SHG.However, analyzing
XPS and AFM data, it has been revealed, that there is the same amount of molecules
on the surface at both temperature T = 2 °C, and T = 21 °C, but the amount
of formed chemicals bond is different. At T = 2 °C molecules form aggregates,
therefore many of available anchor groups stay unattached.