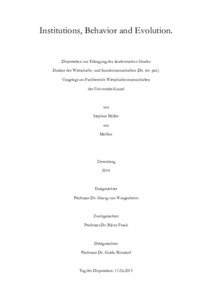 The three articles constituting this thesis are for reasons of content or method related to the following three fields in economics: Behavioral Economics, Evolutionary Game Theory and Formal Institutional Economics. A core element of these fields is the concept of individual preferences. Preferences are of central importance for the conceptional framework to analyze human behavior. They form the foundation for the theory of rational choice which is defined by the determination of the choice set and the selection of the most preferred alternative according to some consistency requirements. The theory of rational choice is based on a very simplified description of the problem of choice (object function and constraints). However, that choices depend on many more factors is for instance propagated by psychological theories and is supported by many empirical and experimental studies. This thesis adds to a better understanding of individual behavior to the extent that the evolution of certain characteristics of preferences and their consequences on human behavior forms the overarching theme of the dissertation.
The long-term effect of evolutionary forces on a particular characteristic of importance in the theoretical, empirical and experimental economic literature, the concept of inequality aversion, is subject of the article “The evolution of inequality aversion in a simplified game of life” (Chapter 4). The contribution of the article is the overcoming of a restriction of former approaches to analyze the evolution of preferences in very simple environments. By classifying human interaction into three central economic games, the article provides a first step towards a simplified and sufficiently complete description of the interaction environment. Within such an environment the article characterizes the evolutionary stable preference distribution. One result shows, that the interaction of the aforementioned three classes can stabilize a preference of inequality aversion in the subpopulation which is favored in the problem of redistribution.
The two remaining articles are concerned with social norms, which dissemination is determined by medium-run forces of cultural evolution. The article “The impact of market innovations on the evolution of social norms: the sustainability case.“ (Chapter 2) studies the interrelation between product innovations which are relevant from a sustainability perspective and an according social norm in consumption. This relation is based on a conformity bias in consumption and the attempt to avoid cognitive dissonances resulting from non-compliant consumption. Among others, it is shown that a conformity bias on the consumption side can lead to multiple equilibria on the side of norm adoption. The article “Evolution of cooperation in social dilemmas: signaling internalized norms.” (Chapter 3) studies the emergence of cooperation in social dilemmas based on the signaling of social norms. The article provides a potential explanation of cooperative behavior, which does not rely on the assumption of structured populations or on the unmotivated ability of social norms to restrict individual actions or strategy spaces.
A comprehensive result of the single articles is the explanation of the phenomenon of partial norm adaption or dissemination of preferences. The plurality of the applied approaches with respect to the proximity to the rational choice approach and regarding the underlying evolutionary mechanics is a particular strength of the thesis. It shows the equality of these approaches in their potential to explain the phenomenon of cooperation in environments that provide material incentives for defective behavior. This also points to the need of a unified framework considering the biological and cultural coevolution of preference patterns.