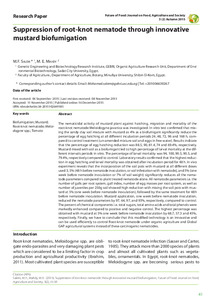 The nematicidal activity of mustard plant against hatching, migration and mortality of the root-knot nematode Meloidogyne javanica was investigated. In vitro test confirmed that mixing the sandy clay soil mixture with mustard as 4% as a biofumigant significantly reduce the percentage of egg hatching at all different incubation periods 24, 48, 72, 96 and 168 h, compared to control treatment (un-amended mixture soil and eggs in free water). Results indicate that the percentage of egg hatching reduction was 88.5, 90, 81.4, 74 and 69.4%, respectively. Mustard mixed with soil as a biofumigant led to high percentage of larval mortality at the different intervals periods in vitro. The percentage of larval mortality was 94, 100, 90.5, 90.5, and 79.4%, respectively compared to control. Laboratory results confirmed that the highest reduction in egg hatching and larval mortality was obtained after incubation period for 48 h. In vivo experiment reveals that the incorporation of the soil pots with mustard at all different doses used 3, 5% (48 h before nematode inoculation, or soil infestation with nematode), and 5% (one week before nematode inoculation or 7% of soil weight) significantly reduces all the nematode parameters compared to plant treated nematode alone. All nematode parameters i.e. the number of galls per root system, gall index, number of egg masses per root system, as well as number of juveniles per 250g soil showed high reduction with mixing the soil pots with mustard at 5% (one week before nematode inoculation), followed by the same treatment for 48h before nematode inoculation. Mustard application, one week before nematode inoculation, reduced the nematode parameters by 97, 64, 97, and 93%, respectively, compared to control. The percent of chemical components i.e. total sugars, total amino acids and total phenols were markedly enhanced compared to positive and negative control. The highest percentage was obtained with mustard at 5% one week before nematode inoculation by 68.7, 57.3 and 45%, respectively. Finally, we have to conclude that this modified technology is an innovative and can be used efficiently to control Root-knot nematode under organic agriculture and Global GAP agricultural systems instead of these carcinogenic nematicides.