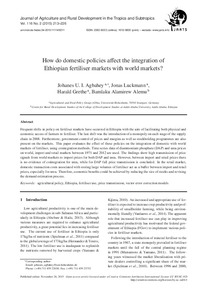 How do domestic policies affect the integration of Ethiopian fertiliser markets with world markets?

Frequent shifts in policy on fertiliser markets have occurred in Ethiopia with the aim of facilitating both physical and economic access of farmers to fertiliser. The last shift was the introduction of a monopoly on each stage of the supply chain in 2008. Furthermore, government control of prices and margins as well as stockholding programmes are also present on the markets. This paper evaluates the effect of these policies on the integration of domestic with world markets of fertiliser, using cointegration methods. Time series data of diammonium phosphate (DAP) and urea prices on world, import and retail markets between 1971 and 2012 are used. The findings show high transmission of price signals from world markets to import prices for both DAP and urea. However, between import and retail prices there is no evidence of cointegration for urea, while for DAP full price transmission is concluded. In the retail market, domestic transaction costs associated with storing large volumes of fertiliser act as a buffer between import and retail prices, especially for urea. Therefore, economic benefits could be achieved by reducing the size of stocks and revising the demand estimation process.