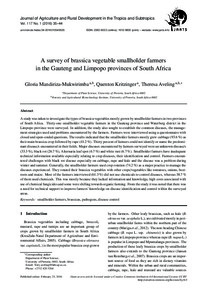 A study was taken to investigate the types of brassica vegetables mostly grown by smallholder farmers in two provinces of South Africa. Thirty-one smallholder vegetable farmers in the Gauteng province and Waterberg district in the Limpopo province were surveyed. In addition, the study also sought to establish the common diseases, the management strategies used and problems encountered by the farmers. Farmers were interviewed using a questionnaire with closed and open–ended questions. The results indicated that the smallholder farmers mostly grew cabbage (93.6%) as their main brassica crop followed by rape (41.2%). Thirty percent of farmers could not identify or name the predominant disease/s encountered in their fields. Major diseases encountered by farmers surveyed were an unknown disease/s (33.3%), black rot (26.7%), Alternaria leaf spot (6.7%) and white rust (6.7%). Smallholder farmers have inadequate technical information available especially relating to crop diseases, their identification and control. Farmers encountered challenges with black rot disease especially on cabbage, rape and kale and the disease was a problem during winter and summer. Generally, the smallholder farmers used crop rotation (74.2%) as a major practice to manage the diseases experienced. They rotated their brassica vegetables with other crops/vegetables like tomatoes, onions, beetroots and maize. Most of the farmers interviewed (61.3%) did not use chemicals to control diseases, whereas 38.7% of them used chemicals. This was mostly because they lacked information and knowledge, high costs associated with use of chemical fungicides and some were shifting towards organic farming. From the study it was noted that there was a need for technical support to improve farmers’ knowledge on disease identification and control within the surveyed areas.