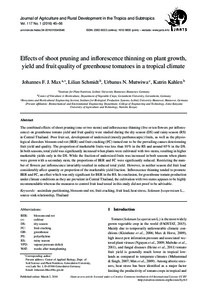 Effects of shoot pruning and inflorescence thinning on plant growth, yield and fruit quality of greenhouse tomatoes in a tropical climate

The combined effects of shoot pruning (one or two stems) and inflorescence thinning (five or ten flowers per inflorescence) on greenhouse tomato yield and fruit quality were studied during the dry season (DS) and rainy season (RS) in Central Thailand. Poor fruit set, development of undersized (mostly parthenocarpic) fruits, as well as the physiological disorders blossom-end rot (BER) and fruit cracking (FC) turned out to be the prevailing causes deteriorating fruit yield and quality. The proportion of marketable fruits was less than 10% in the RS and around 65% in the DS. In both seasons, total yield was significantly increased when plants were cultivated with two stems, resulting in higher marketable yields only in the DS. While the fraction of undersized fruits was increased in both seasons when plants were grown with a secondary stem, the proportions of BER and FC were significantly reduced. Restricting the number of flowers per inflorescence invariably resulted in reduced total yield. However, in neither season did fruit load considerably affect quantity or proportion of the marketable yield fraction. Inflorescence thinning tended to promote BER and FC, an effect which was only significant for BER in the RS. In conclusion, for greenhouse tomato production under climate conditions as they are prevalent in Central Thailand, the cultivation with two stems appears to be highly recommendable whereas the measures to control fruit load tested in this study did not proof to be advisable.