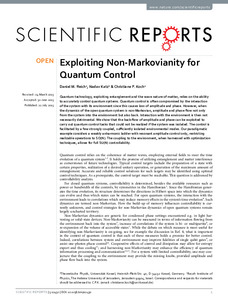 Quantum technology, exploiting entanglement and the wave nature of matter, relies on the ability to accurately control quantum systems. Quantum control is often compromised by the interaction of the system with its environment since this causes loss of amplitude and phase. However, when the dynamics of the open quantum system is non-Markovian, amplitude and phase flow not only from the system into the environment but also back. Interaction with the environment is then not necessarily detrimental. We show that the back-flow of amplitude and phase can be exploited to carry out quantum control tasks that could not be realized if the system was isolated. The control is facilitated by a few strongly coupled, sufficiently isolated environmental modes. Our paradigmatic example considers a weakly anharmonic ladder with resonant amplitude control only, restricting realizable operations to SO(N). The coupling to the environment, when harnessed with optimization techniques, allows for full SU(N) controllability.