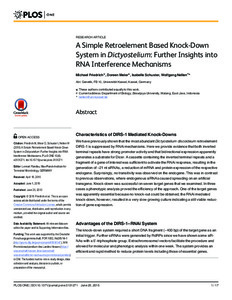 A simple retroelement based knock-down system in Dictyostelium

Characteristics of DIRS-1 Mediated Knock-Downs __
We have previously shown that the most abundant Dictyostelium discoideum retroelement
DIRS-1 is suppressed by RNAi mechanisms. Here we provide evidence that both inverted
terminal repeats have strong promoter activity and that bidirectional expression apparently
generates a substrate for Dicer. A cassette containing the inverted terminal repeats and a
fragment of a gene of interest was sufficient to activate the RNAi response, resulting in the
generation of ~21 nt siRNAs, a reduction of mRNA and protein expression of the respective
endogene. Surprisingly, no transitivity was observed on the endogene. This was in contrast
to previous observations, where endogenous siRNAs caused spreading on an artificial
transgene. Knock-down was successful on seven target genes that we examined. In three
cases a phenotypic analysis proved the efficiency of the approach. One of the target genes
was apparently essential because no knock-out could be obtained; the RNAi mediated
knock-down, however, resulted in a very slow growing culture indicating a still viable reduction
of gene expression.
Advantages of the DIRS-1–RNAi System __
The knock-down system required a short DNA fragment (~400 bp) of the target gene as an
initial trigger. Further siRNAs were generated by RdRPs since we have shown some siRNAs
with a 5’-triphosphate group. Extrachromosomal vectors facilitate the procedure and
allowed for molecular and phenotypic analysis within one week. The system provides an
efficient and rapid method to reduce protein levels including those of essential genes.