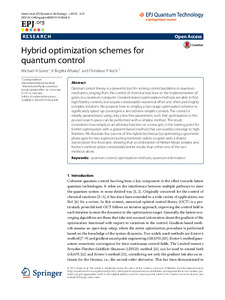 Optimal control theory is a powerful tool for solving control problems in quantum mechanics, ranging from the control of chemical reactions to the implementation of gates in a quantum computer. Gradient-based optimization methods are able to find high fidelity controls, but require considerable numerical effort and often yield highly complex solutions. We propose here to employ a two-stage optimization scheme to significantly speed up convergence and achieve simpler controls. The control is initially parametrized using only a few free parameters, such that optimization in this pruned search space can be performed with a simplex method. The result, considered now simply as an arbitrary function on a time grid, is the starting point for further optimization with a gradient-based method that can quickly converge to high fidelities. We illustrate the success of this hybrid technique by optimizing a geometric phase gate for two superconducting transmon qubits coupled with a shared transmission line resonator, showing that a combination of Nelder-Mead simplex and Krotov’s method yields considerably better results than either one of the two methods alone.