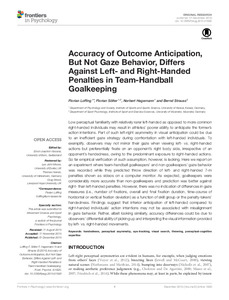 Accuracy of outcome anticipation, but not gaze behavior, differs against left- and right-handed penalties in team-handball goalkeeping

Low perceptual familiarity with relatively rarer left-handed as opposed to more common right-handed individuals may result in athletes' poorer ability to anticipate the former's action intentions. Part of such left-right asymmetry in visual anticipation could be due to an inefficient gaze strategy during confrontation with left-handed individuals. To exemplify, observers may not mirror their gaze when viewing left- vs. right-handed actions but preferentially fixate on an opponent's right body side, irrespective of an opponent's handedness, owing to the predominant exposure to right-handed actions. So far empirical verification of such assumption, however, is lacking. Here we report on an experiment where team-handball goalkeepers' and non-goalkeepers' gaze behavior was recorded while they predicted throw direction of left- and right-handed 7-m penalties shown as videos on a computer monitor. As expected, goalkeepers were considerably more accurate than non-goalkeepers and prediction was better against right- than left-handed penalties. However, there was no indication of differences in gaze measures (i.e., number of fixations, overall and final fixation duration, time-course of horizontal or vertical fixation deviation) as a function of skill group or the penalty-takers' handedness. Findings suggest that inferior anticipation of left-handed compared to right-handed individuals' action intentions may not be associated with misalignment in gaze behavior. Rather, albeit looking similarly, accuracy differences could be due to observers' differential ability of picking up and interpreting the visual information provided by left- vs. right-handed movements.