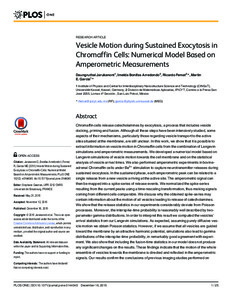 (Numerical model based on amperometric measurements)

Chromaffin cells release catecholamines by exocytosis, a process that includes vesicle docking, priming and fusion. Although all these steps have been intensively studied, some aspects of their mechanisms, particularly those regarding vesicle transport to the active sites situated at the membrane, are still unclear. In this work, we show that it is possible to extract information on vesicle motion in Chromaffin cells from the combination of Langevin simulations and amperometric measurements. We developed a numerical model based on Langevin simulations of vesicle motion towards the cell membrane and on the statistical analysis of vesicle arrival times. We also performed amperometric experiments in bovine-adrenal Chromaffin cells under Ba2+ stimulation to capture neurotransmitter releases during sustained exocytosis. In the sustained phase, each amperometric peak can be related to a single release from a new vesicle arriving at the active site. The amperometric signal can then be mapped into a spike-series of release events. We normalized the spike-series resulting from the current peaks using a time-rescaling transformation, thus making signals coming from different cells comparable. We discuss why the obtained spike-series may contain information about the motion of all vesicles leading to release of catecholamines. We show that the release statistics in our experiments considerably deviate from Poisson processes. Moreover, the interspike-time probability is reasonably well described by two-parameter gamma distributions. In order to interpret this result we computed the vesicles’ arrival statistics from our Langevin simulations. As expected, assuming purely diffusive vesicle motion we obtain Poisson statistics. However, if we assume that all vesicles are guided toward the membrane by an attractive harmonic potential, simulations also lead to gamma distributions of the interspike-time probability, in remarkably good agreement with experiment. We also show that including the fusion-time statistics in our model does not produce any significant changes on the results. These findings indicate that the motion of the whole ensemble of vesicles towards the membrane is directed and reflected in the amperometric signals. Our results confirm the conclusions of previous imaging studies performed on single vesicles that vesicles’ motion underneath plasma membranes is not purely random, but biased towards the membrane.