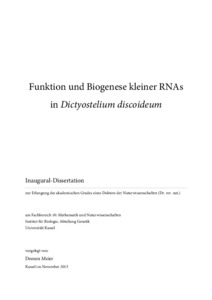 RNA mediated gene silencing pathways are highly conserved among eukaryotes and they have been well investigated in animals and in plants. Longer dsRNA molecules trigger the silencing pathways: RNase III proteins and their dsRNA binding protein (dsRBP) partners recognize those molecules as a substrate and process 21 nucleotide long microRNAs (miRNAs) or small interfering RNAs (siRNAs). Some organisms encode RNA dependent RNA polymerases (RdRPs), which are able to expand the pool of existing siRNAs. Argonaute proteins are able to bind small regulatory RNAs and are subsequently recruited to target mRNAs by base complementary. This leads in turn to transcriptional or posttranscriptional silencing of respective genes. The Dictyostelium discoideum genome encodes two Dicer homologues (DrnA and DrnB), five Argonaute proteins (AgnA to AgnE) and three RdRPs (RrpA to RrpC). In addition, the amoeba is known to express miRNAs and siRNAs, while the latter derive mainly from the DIRS-1 retrotransposon.
One part of this work focused on the miRNA biogenesis pathway of D. discoideum. It was shown that the dsRNA binding protein RbdB is a necessary component for miRNA processing in the amoeba. There were no mature miRNAs detectable by Northern blot analysis in rbdB- strains, which is also true for drnB mutants. Moreover, primary miRNA-transcripts (pri-miRNAs) accumulated in rbdB- and drnB- strains. Fluorescence microscopy studies showed a nuclear localization of RbdB. RbdB accumulated in distinct perinucleolar foci. These were reminiscent of plant dicing bodies that contain essential protein components for miRNA processing. It is well known that RNase III enzymes and dsRBPs work together during miRNA processing in higher eukaryotes. This work demonstrated that the same is true for members of the amoebozoa supergroup. In Arabidopsis the nuclear zinc finger protein Serrate (SE) is also necessary for miRNA processing. The D. discoideum homologue SrtA, however, is not relevant which has been shown by the analysis of the respective knockdown strain.
MiRNAs are known to be differentially expressed in several RNAi knockout strains. The accumulation of miRNAs in agnA- strains and a strong decrease in rbdB- strains were criteria that could thus be successfully used (among others) to identify and validate new miRNAs candidates by Illumina®-RNA sequencing.
In another part of this study, the silencing and amplification of the DIRS-1 retrotransposons was analyzed in more detail. It was already known that DIRS-1 transcripts and extrachromosomal DIRS-1 DNA molecules accumulated in agnA- strains. This phenotype was correlated with the loss of endogenous DIRS-1 siRNAs in the knockout strain. By deep sequencing analysis of small RNAs from the AX2 wild type and the agnA- strain, the strong decrease of endogenous DIRS-1 siRNAs in the mutant strain (accounting for 70 %) could be confirmed. Further analysis of the data revealed an unequal distribution of DIRS-1 derived siRNAs along the retroelement in the wild type strain, since only very few of them matched the inverted terminal repeats (ITRs) and the 5’- half of the first open reading frame (ORF). Besides, sense and antisense siRNAs were asymmetrically distributed, as well.
By using different reporter constructs it was shown indirectly that AgnA is necessary for the RrpC mediated production of secondary DIRS-1 siRNAs. These analyses also demonstrated an amplification of siRNAs in 5’- and in 3’-direction.
Further analysis of the agnA- strain revealed that not only DIRS-1 sense transcripts but also ORF2 and ORF3 encoded proteins were enriched. In contrast, the ORF1 encoded protein GAG was equally expressed in the mutant and the wild type. This might reflect the unequal distribution of endogenous DIRS-1 siRNAs along the retrotransposon.
Southern Blot and PCR-analyses showed that extrachromosomal DIRS-1 DNA molecules are present in the cytoplasm of angA- strains and that they are complementary to sense transcripts of intact DIRS-1 elements. Thus, the extrachromosomal DIRS-1 intermediates are likely incomplete cDNA molecules generated by the DIRS-1 encoded reverse transcriptase. One could hypothesize that virus like particles (VLPs) are the places of DIRS-1 cDNA synthesis. At least, DIRS-1 GAG proteins interact and fluorescence microscopy studies showed that they localize in distinct cytoplasmic foci which accumulate in close proximity to the nuclei.