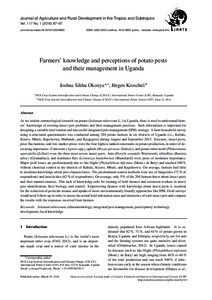 As we initiate entomological research on potato (Solanum tuberosum L.) in Uganda, there is need to understand farmers’ knowledge of existing insect pest problems and their management practices. Such information is important for designing a suitable intervention and successful integrated pest management (IPM) strategy. A farm household survey using a structured questionnaire was conducted among 204 potato farmers in six districts of Uganda (i.e., Kabale, Kisoro, Mbale, Kapchorwa, Mubende, and Kyegegwa) during August and September 2013. Diseases, insect pests, price fluctuations, and low market prices were the four highest ranked constraints in potato production, in order of decreasing importance. Cutworms (Agrotis spp.), aphids (Myzus persicae (Sulzer)), and potato tuber moth (Phthorimaea operculella (Zeller)) were the three most severe insect pests. Ants (Dorylis orantalis Westwood), whiteflies (Bemisia tabaci (Gennadius)), and leafminer flies (Liriomyza huidobrensis (Blanchard)) were pests of moderate importance. Major yield losses are predominantly due to late blight (Phytophthora infestans (Mont.) de Bary) and reached 100% without chemical control in the districts of Kabale, Kisoro, Mbale, and Kapchorwa. On average, farmers had little to moderate knowledge about pest characteristics. The predominant control methods were use of fungicides (72% of respondents) and insecticides (62% of respondents). On average, only 5% of the 204 farmers knew about insect pests and their natural enemies. This lack of knowledge calls for training of both farmers and extension workers in insect pest identification, their biology, and control. Empowering farmers with knowledge about insect pests is essential for the reduction of pesticide misuse and uptake of more environmentally friendly approaches like IPM. Field surveys would need follow-up in order to assess the actual field infestation rates and intensities of each insect pest and compare the results with the responses received from farmers.