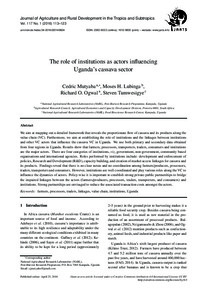 The role of institutions as actors influencing Uganda’s cassava sector

We aim at mapping out a detailed framework that reveals the proportionate flow of cassava and its products along the value chain (VC). Furthermore, we aim at establishing the role of institutions and the linkages between institutions and other VC actors that influence the cassava VC in Uganda. We use both primary and secondary data obtained from four regions in Uganda. Results show that farmers, processors, transporters, traders, consumers and institutions are the major actors. There are four categories of institutions, viz, government, non-government, community based organisations and international agencies. Roles performed by institutions include: development and enforcement of policies, Research and Development (R&D), capacity building, and creation of market access linkages for cassava and its products. Findings reveal that there is no clear nexus and no coordination among farmers/producers, processors, traders, transporters and consumers. However, institutions are well coordinated and play various roles along the VC to influence the dynamics of actors. Policy-wise it is important to establish strong private-public partnerships to bridge the impaired linkages between the actors (farmers/producers, processors, traders, transporters, and consumers) and institutions. Strong partnerships are envisaged to reduce the associated transaction costs amongst the actors.