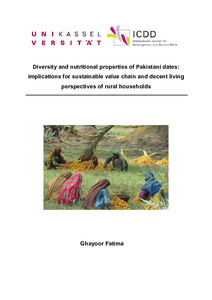 Date palm (Phoenix dactylifera L.) occupies almost three percent of the total worldwide cultivated area, with an annual production of seven million tonnes (t). Pakistan is an ideal place for the cultivation of date palm due to its sandy loam soil and semi-arid climate. In 2012, Pakistan produced 600,000 t of dates, on an area of 95,000 ha. Baluchistan province is the country’s top date producer, followed by Sindh, Punjab and Khyber Pakhtunkhwa (KPK) provinces. More than 300 date varieties are known to exist in Pakistan and some commercially important cultivars are: Karbalaen, Aseel, Muzawati, Fasli, Begum Jhangi, Hillawi, Dashtiari, Sabzo, Koharaba, Jaan Swore, Rabai and Dhakki. Six districts from the four provinces of Pakistan (Jhang, Muzaffargarh and Bahawalpur (Punjab), Dera Ismail Khan (KPK), Khairpur (Sindh) and Panjgur (Baluchistan)) with largest area under date palm cultivation were selected to conduct socio-economic surveys including the income sources of date palm growers. A structured questionnaire with open-ended and closed questions was used for face-to-face interviews of 170 date palm growers. At each location after selection of a first farmer through a local guide, the former was requested to provide names and addresses of three other date growers in his area. From these three names, one was randomly selected for the next sampling. Additionally, date palm fronds and fruits of all available cultivars were collected for morphological and nutritional analyses. Soil samples were collected from the groves for subsequent chemical and physical analyses. Almost all farmers used dates as a food item for their families and some were using low quality dates as a feed for their livestock. Apart from dates, other date palm components (trunk, spadix, frond, inflorescence and seed) were used by date palm growers as a raw material for making many by-products for their families. Date palm had a major contribution in the income of households, 24% received 91-100% of their income from date palms. More than half of the surveyed farmers had date palm groves, but scattered plantations, home gardens and intercropping systems with cereal and other fruits were also present. Dhakki, Muzawati, Aseel, and Karbalaen were the most important commercial cultivars grown in the provinces of KPK, Baluchistan, and Sindh. Aseel, Karoch, Haleni, Karbalaen, and Muzawati cultivars had the most firm fruit and good total soluble sugar, calcium and magnesium contents. The amount of magnesium found in dates of studied cultivars ranged from 0.143 to 0.876 mg g-1. A great variation in frond morphology was recorded among the cultivars. Fruit length and fruit weight was highest in Dhakki date, making it visually more attractive for customers in addition to its good nutritional properties. The seed weight of the studied cultivars ranged from 0.7-2.0 g, while Desi dates had largest seed, making them less attractive for marketing. However, in terms of nutritional value and fruit size, most of the investigated varieties can compete with globally important commercial dates.