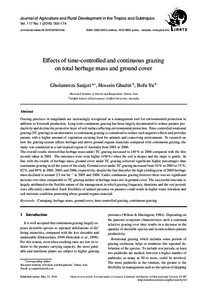 Grazing practices in rangelands are increasingly recognized as a management tool for environmental protection in addition to livestock production. Long term continuous grazing has been largely documented to reduce pasture productivity and decline the protective layer of soil surface affecting environmental protection. Time-controlled rotational grazing (TC grazing) as an alternative to continuous grazing is considered to reduce such negative effects and provides pasture with a higher amount of vegetation securing food for animals and conserving environment. To research on how the grazing system affects herbage and above ground organic materials compared with continuous grazing, the study was conducted in a sub-tropical region of Australia from 2001 to 2006.
The overall results showed that herbage mass under TC grazing increased to 140% in 2006 compared with the first records taken in 2001. The outcomes were even higher (150%) when the soil is deeper and the slope is gentle. In line with the results of herbage mass, ground cover under TC grazing achieved significant higher percentages than continuous grazing in all the years of the study. Ground cover under TC grazing increased from 54% in 2003 to 73%, 82%, and 89% in 2004, 2005, and 2006, respectively, despite the fact that after the high yielding year of 2004 herbage mass declined to around 2.5 ton ha^(−1) in 2005 and 2006. Under continuous grazing however there was no significant increase over time comparable to TC grazing neither in herbage mass nor in ground cover. The successful outcome is largely attributed to the flexible nature of the management in which grazing frequency, durations and the rest periods were efficiently controlled. Such flexibility of animal presence on pastures could result in higher water retention and soil moisture condition promoting above ground organic material.