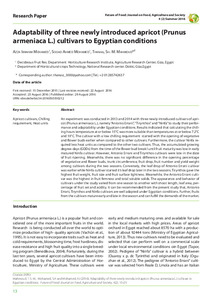 An experiment was conducted in 2013 and 2014 with three newly introduced cultivars of apricot (Prunus armeniaca L.), namely “Antonio Errani”, “Tirynthos” and “Ninfa” to study their performance and adaptability under Egyptian conditions. Results indicated that calculating the chilling hours temperature at or below 15°C was more suitable than temperatures at or below 7.2°C and 10°C. The cultivar with a low chilling requirement started with the opening of vegetative and flower buds earlier when compared to other cultivars. Furthermore, the cultivar Ninfa required less heat units as compared to the other two cultivars. Thus, the accumulated growing degree-days (GDDs) from the time of the flower bud break l until fruit maturity was low in early matured Ninfa cultivar. However, Antonio Errani and Tirynthos cultivars were late in the date of fruit ripening. Meanwhile, there was no significant difference in the opening percentage of vegetative and flower buds, trunk circumference, fruit drop, fruit number and yield weight among cultivars during the two seasons. Conversely, the leaf drop of Antonio Errani cultivar was earlier while Ninfa cultivar started it’s leaf drop later in the two seasons. Tirynthos gave the highest fruit weight, fruit size and fruit surface lightness. Meanwhile, the Antonio Errani cultivar was the highest in fruit firmness and total soluble solids. The appearance and behavior of cultivars under the study varied from one season to another with shoot length, leaf area, percentage of fruit set and acidity. It can be recommended from the present study that, Antonio Errani, Tirynthos and Ninfa cultivars are well adapted under Egyptian conditions. Further, fruits from the cultivars mature early and late in the season and can fulfill the demands of the market.