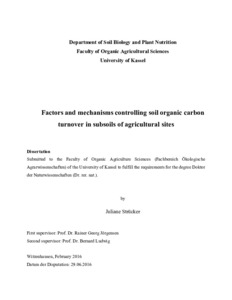 Two-third of the terrestrial C is stored in soils, and more than 50% of soil organic C (SOC) is stored in subsoils from 30 – 100 cm. Hence, subsoil is important as a source or sink for CO2 in the global carbon cycle. Especially the stable organic carbon (OC) is stored in subsoil, as several studies have shown that subsoil OC is of a higher average age than topsoil OC. However, there is still a lack of knowledge regarding the mechanisms of C sequestration and C turnover in subsoil.
Three main factors are discussed, which possibly reduce carbon turnover rates in subsoil: Resource limitation, changes in the microbial community, and changes in gas conditions.
The experiments conducted in this study, which aimed to elucidate the importance of the mentioned factors, focused on two neighbouring arable sites, with depth profiles differing in SOC stocks: One Colluvic Cambisol (Cam) with high SOC contents (8-12 g kg-1) throughout the profile and one Haplic Luvisol (Luv) with low SOC contents (3-4 g kg-1) below 30 cm depth.
The first experiment was designed to gain more knowledge regarding the microbial community and its influence on carbon sequestration in subsoil. Soil samples were taken at four different depths on the two sites. Microbial biomass C (MBC) was determined to identify depth gradients in relation to the natural C availability. Bacterial and fungal residues as well as ergosterol were determined to quantify changes in the in the microbial community composition. Multi-substrate-induced-respiration (MSIR) was used to identify shifts in functional diversity of the microbial community. The MSIR revealed that substrate use in subsoil differed significantly from that in topsoil and also differed highly between the two subsoils, indicating a strong influence of resource limitations on microbial substrate use. Amino sugar analysis and the ratio of ergosterol to microbial biomass C showed that fungal dominance decreased with depth. The results clearly demonstrated that microbial parameters changed with depth according to substrate availability.
The second experiment was an incubation experiment using subsoil gas conditions with and without the addition of C4 plant residues. Soil samples were taken from topsoil and subsoil of the two sites. SOC losses during the incubation, were not influenced by the subsoil gas conditions. Plant-derived C losses were generally stronger in the Cam (7.5 mg g-1), especially at subsoil gas conditions, than in the Luv (7.0 mg g-1). Subsoil gas conditions had no general effects on microbial measures with and without plant residue addition. However, the contribution of plant-derived MBC to total MBC was significantly reduced at subsoil gas conditions. This lead to the conclusion that subsoil gas conditions alter the metabolism of microorganisms but not the degradation of added plant residues is general.
The third experiment was a field experiment carried out for two years. Mesh bags containing original soil material and maize root residues (C4 plant) were buried at three different depths at the two sites. The recovery of the soilbags took place 12, 18, and 24 months after burial. We determined the effects of these treatments on SOC, density fractions, and MBC. The mean residence time for maize-derived C was similar at all depths and both sites (403 d). MBC increased to a similar extent (2.5 fold) from the initial value to maximum value. This increase relied largely on the added maize root residues. However, there were clear differences visible in terms of the substrate use efficiency, which decreased with depth and was lower in the Luv than in the Cam. Hence freshly added plant material is highly accessible to microorganisms in subsoil and therefore equally degraded at both sites and depths, but its metabolic use was determined by the legacy of soil properties.
These findings provide strong evidence that resource availability from autochthonous SOM as well as from added plant residues have a strong influence on the microbial community and its use of different substrates. However, under all of the applied conditions there was no evidence that complex substrates, i.e. plant residues, were less degraded in subsoil than in topsoil.

This research was supported by the Research Training Group 1397 “Regulation of soil organic matter and nutrient turnover in organic agriculture” of the German Research Foundation (DFG).