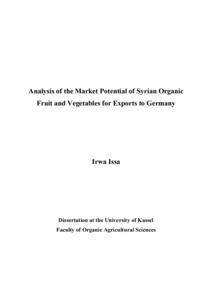 Syria has been a major producer and exporter of fresh fruit and vegetables (FFV) in the Arabic region. Prior to 2011, Syrian FFV were mainly exported to the neighbouring countries, the Gulf States and Northern Africa as well as to Eastern European countries. Although the EU is potentially one of the most profitable markets of high quality FFV (such as organic ones) in the world, Syrian exports of FFV to Western European countries like Germany have been small. It could be a lucrative opportunity for Syrian growers and exporters of FFV to export organic products to markets such as Germany, where national production is limited to a few months due to climatic conditions. Yet, the organic sector in Syria is comparatively young and only a very small area of FFV is certified according to EU organic regulations. Up to the author’s knowledge, little was known about Syrian farmers’ attitudes towards organic FFV production. There was also no study so far that explored and analysed the determining factors for organic FFV adoption among Syrian farmers as well as the exports of these products to the EU markets.

The overarching aim of the present dissertation focused on exploring and identifying the market potential of Syrian exports of organic FFV to Germany. The dissertation was therefore concerned with three main objectives: (i) to explore if German importers and wholesalers of organic FFV see market opportunities for Syrian organic products and what requirements in terms of quality and quantity they have, (ii) to determine the obstacles Syrian producers and exporters face when exporting agricultural products to Germany, and (iii) to investigate whether Syrian farmers of FFV can imagine converting their farms to organic production as well as the underlying reasons why they do so or not. A twofold methodological approach with expert interviews and a farmer survey were used in this dissertation to address the abovementioned objectives. While expert interviews were conducted with German and Syrian wholesalers of (organic) FFV in 2011 (9 interviews each), the farmer survey was administrated with 266 Syrian farmers of FFV in the main region for the production of FFV (i.e. the coastal region) from November 2012 till May 2013. For modelling farmers’ decisions to adopt organic farming, the Theory of Planned Behaviour as theoretical framework and Partial Least Squares Structural Equation Modelling as the main method for data analysis were used in this study. The findings of this dissertation yield implications for the different stakeholders (governmental institutions and NGOs, farmers, exporters, wholesalers, etc.) who are interested in prompting the Syrian export of organic products. Based on the empirical results and a literature review, an action plan to promote Syrian production and export of organic products was developed which can help in the post-war period in Syria at improving the organic sector.

Ministry of Higher Education and Al-Baath University in Syria; Syrian Ministry of Agriculture and Agrarian Reform and the Citrus Fruit Board, Tartous (Syria); University of Kassel and the German Academic Exchange Service (DAAD)