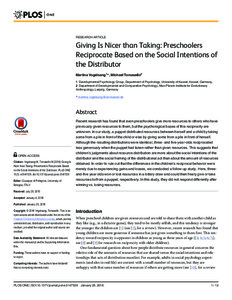 Giving Is Nicer than Taking: Preschoolers Reciprocate Based on the Social Intentions of the Distributor

Recent research has found that even preschoolers give more resources to others who have previously given resources to them, but the psychological bases of this reciprocity are unknown. In our study, a puppet distributed resources between herself and a child by taking some from a pile in front of the child or else by giving some from a pile in front of herself. Although the resulting distributions were identical, three- and five-year-olds reciprocated less generously when the puppet had taken rather than given resources. This suggests that children’s judgments about resource distribution are more about the social intentions of the distributor and the social framing of the distributional act than about the amount of resources obtained. In order to rule out that the differences in the children’s reciprocal behavior were merely due to experiencing gains and losses, we conducted a follow-up study. Here, three- and-five year olds won or lost resources in a lottery draw and could then freely give or take resources to/from a puppet, respectively. In this study, they did not respond differently after winning vs. losing resources.