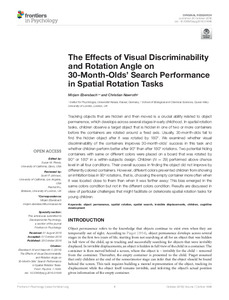 Tracking objects that are hidden and then moved is a crucial ability related to object permanence, which develops across several stages in early childhood. In spatial rotation tasks, children observe a target object that is hidden in one of two or more containers
before the containers are rotated around a fixed axis. Usually, 30-month-olds fail to find the hidden object after it was rotated by 180°. We examined whether visual
discriminability of the containers improves 30-month-olds’ success in this task and whether children perform better after 90° than after 180° rotations. Two potential hiding containers with same or different colors were placed on a board that was rotated by 90° or 180° in a within-subjects design. Children (N D 29) performed above chance level in all four conditions. Their overall success in finding the object did not improve by differently colored containers. However, different colors prevented children from showing an inhibition bias in 90° rotations, that is, choosing the empty container more often when it was located close to them than when it was farther away: This bias emerged in the same colors condition but not in the different colors condition. Results are discussed in view of particular challenges that might facilitate or deteriorate spatial rotation tasks for young children.